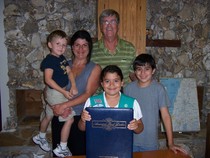 Alicia Perez, age 10 (Ocala Springs) is onehappy Girl Scout. A member of Troop 125, her ticket was drawn for an album commemorating America’sFirst Ladies offered by the General Francis Marion Stamp Club in Ocala. The club held a drawing as part of its exhibit at the West Central Florida Council’s “Discover the World” event, held on April 14 at Vanguard High School. Close to 300 area Girl Scouts were on hand to celebrate the 100th Anniversary of Girl Scouting in America.

In addition to special illustrations and stories about each of the Presidential wives, the album features postage stamps commemorating the Presidents. Teresa, Alicia’s mom and a teacher at Ocala Springs Elementary School where Alicia is a 4th grader, said that the album is a perfect compliment to next year’s 5thgrade American history class.

Stamp Club Thanks Bank of the Ozarks

The General Francis Marion Stamp Club, Ocala, offered its appreciation to the local branch of Bank of the Ozarks for its accommodations in providing the club with a meeting place. During a recent visit, Club President Don Parsells (Spruce Creek Preserve), right and club Treasurer Joe Rosinski (On Top Of The World) presented Branch Manager April Brenton with a certificate recognizing the Banks’ commitment to the community. Celebrating its 22nd year, the General Francis Marion Stamp Club has over 50 members engaged in the hobby of stamp collecting. The club meets on the first and third Wednesdays of every month at 1 pm at Bank of the Ozarks and on the second Wednesday at 7 pm at Queen of Peace RC church library. For information about membership, contact Dennis Niemira at 352-854-0892 or check the club’s website: www.ocalagfmstampclub.com